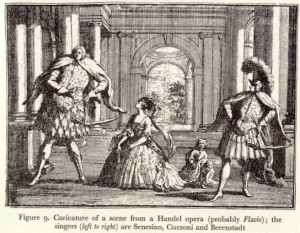 What was the part of Handel in the scandal?

The previous year he was in Dresden one of the spectators of the lavish royal wedding, with its magnificient musical events featuring the castrato Senesino and the soprano Margherita Durastanti. Italian opera in Dresden was at its zenith. But when in 1720, Senesino insulted the Kapellmeister Heinichen and threw the score at his feet, the scandal that followed led to the closing of the opera. The singers were dismissed and left Dresden for London… where roles sur mesure in the new Handel opera were just waiting for them! Coincidence? Or should we see a plot, in agreement with the singers, in order to break their contract in Dresden and attract them to the Royal Academy of Music? From Dresden to London, we follow the famous Senesino in some of his greatest roles: behind the ego, the whims, money and intrigue, is the story of one of the greatest talents of the history of singing.