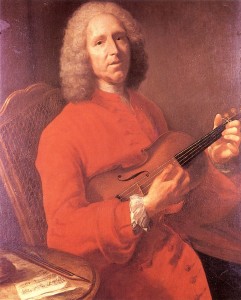 It is hard sometimes to believe that Rameau really belongs to the XVIIIth century: his music anticipates in ideas, in colours, in impressions, in mixed affects, musical languages that shall not be found again before the turn of the XXth century.

His range of expression seems to be without limit. Who better than him, who was said to be a cold and dry man, has understood and expressed in music all the nuances and the complexity of human nature? His music is a constant festival of rythms and colours, a a fascinating mix of tenderness and weirdness, tragedy and humor, pump and delicacy.

Les Ambassadeurs reveal Rameau’s incomparable orchestral sound, its voluptuous texture under sharp accents and precise contours, its eminently theatrical resources, its incredible modernity. Not a single bar of this visionary genius deserves to be forgotten…

Anacréon (1754) & Anacréon (1757)
2 one-act-operas by Rameau, that have the main character (poet Anacreon) in common. Nevertheless, those are two independant works that appear to be ideally complementary