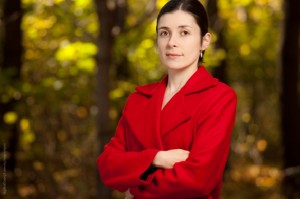 was born in Sofia where she studied violin from an early age. In 2006 she obtained both Bachelor’s and Master’s degrees at the National Music Academy in Sofia, having studied with Prof. Yosif Radionov and Stoyka Milanova. She studied baroque violin with Anton Steck and with Lucy van Dael. She has participated in numerous violin masterclasses with Yfrah Neeman, Kolja Lessing, Mincho Minchev and summer courses in Blankenburg and Obertsdorf in Germany with Reimar Orlowsky and Peter Buck; in Austria with members of Bartok, Keller, Artis and Prazak Quartets; and at the International Masterclass Apeldoorn, The Netherlands. From 2003 until 2008 she was concertmaster of Classic FM Radio Orchestra – Sofia and Sofia Festival Orchestra. In 2007 she was concertmaster with The National Youth Orchestra of The Netherlands and she appeared as a soloist with the Academic Symphony Orchestra Sofia, Classic FM Radio Orchestra, Chamber Orchestra Orpheus, Ars Barocca Ensemble – awarded by Bulgarian National Radio with the prize “Ensemble of 2007”

Zefira Valova was a member of the European Union Baroque Orchestra in 2008 working with Roy Goodman, Lars Ulrik Mortensen and Enrico Onofri, and a concertmaster under the direction of Petra Mullejans in 2009 and Ton Koopman in 2010 and Alexis Kossenko in 2011. With Concerto Antico – based in Bulgaria consort of early music she performed at the Festival de Musica Antiga Barcelona, Spain (2007 & 2008), and at the “Fabolous Fringe” series of the Oude Muziek Festival in Utrecht (2008 & 2009). She is among the founders of the Sofia Baroque Arts Festival – the only one of its kind in Bulgaria. She is a member of ensemble Cordevento led by the Dutch recorder player Erik Bosgraaf. Since its establishing in August 2011 she is the concertmaster of Orchestra Les Ambassadeurs with musical director Alexis Kossenko.

Lately she is playing also with the orchestras Le Chambre Phillharmonique, Ensemble Matheus, Arte dei Suonatori. She has recorded for Brilliant Classics, Channel Classics and Alpha. In 2009 Zefira Valova has been awarded in the competition of the Jumpstart Jr. Foundation, which provided her with a violin labeled Lorenzo & Tomaso Carcassi 1760, Florence.